Check out our Gold winners, as well as a complete list of awards presented to Arizona Highways during the 2013 IRMA conference, held this past weekend in Baltimore: 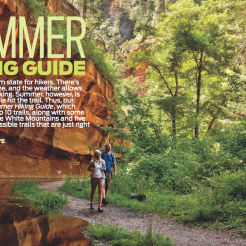 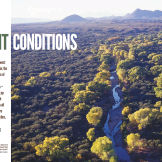 People are always surprised when I tell them how small the staff at Arizona Highways is. I remember having the same reaction when I first visited three years ago. Back then I was tagging along with Editor Robert Stieve as part of a mentorship program through the Walter Cronkite School of Journalism. Little did I know that two years later – in August 2011 – I would return to the magazine as an intern.

When you begin an internship with a company, you never really know what to expect. And I’ve had my fair share of internship experience, but no staff has been as welcoming as the one at this magazine. From day one, I’ve felt like I was a part of this publication – and that’s a rare feeling for an intern. This also means I’m fair game for any jokes made at my expense, but I welcome that too. It’s part of the environment here.

After spending the fall of 2011 as a photo intern and then moving to the writing side for the spring, I’ve been able to see different perspectives on the office. The great thing about Highways is that there isn’t always a typical day here. Whether it’s an image review for an upcoming issue or a weekly staff meeting to catch up, each day brings a new challenge. In a countdown, here are my five favorite things about Arizona Highways:

5. Book Projects: This spring, I worked with the Department of Transportation on a book detailing the history of transportation in Arizona. While all of the historic photo research required was grueling, it is a point of pride to say I’ve been the photo editor of a book while still a college student. It was a lot of responsibility, but I feel honored that the magazine trusted me with such a big project.

4. Lunch Time: Whether we’re gathered around the art table in the middle of the office or out at a downtown restaurant, lunch with this crowd is always a welcome break in the middle of the work day. Between the unintentionally funny stories (many of them from Senior Editor Randy Summerlin) and the conversation topics that range from scuba diving to historic houses, it’s guaranteed to be interesting. Especially when Photo Editor Jeff Kida breaks into show tunes.

Hanging out with Jeff Kida at a photo workshop

3. Photo Shoots: I’ve had the honor of tagging along on some photo shoots with some of Highway’s great photographers – including a workshop with Paul Markow, Jeff Kida and Leroy DeJolie. But one of the most valuable skills I learned was product photography.

Setting up studio lights with Jeff Kida and Rick Buress

I’ve always wanted to experiment with studio lights, and I had the chance in January when we needed some knick-knacks photographed for the timeline in our February 2012 centennial issue. Jeff set up a mini-studio and taught me how to use lights and soft-boxes to create a great studio setup for small objects. Or to photograph silly portraits of editors Kathy Ritchie and Kelly Kramer, when they stop by.

In the White Mountains with Jeff Kida and Robert Stieve

2. Travel: I’ve had the chance to visit some wonderful places both near and far for this magazine. For longer road trips, I’ve been hiking in the White Mountains for a cover shoot and I’ve driven to Casa Grande to photograph a historic hotel. In the Phoenix area, I’ve been privileged to have lunch in Paul Markow’s studio and I’ve seen some beautiful Ansel Adams prints stored at ImageCraft printers.

1. People: In the end, my favorite part about this internship has been the people I have met. I’ve met some wonderful people while researching stories – like the six volunteers at the Girl Scout Historical Society in Phoenix for a story in the May 2012 issue – but some of the best have been the people I get to work with right here in this office. Kat keeps us constantly amused with her impressions. Jeff has a factoid or story for almost everything. Randy doesn’t always realize how funny he is, especially when telling us about his Texas version of doughnuts: ‘spudnuts.’

Art Director Keith Whitney has perfected his own style of photography, where he doesn’t look through the view finder but fires away at different angles. The list of quirks goes on, but the point is that each person is a joy to work with. As a young journalist, it is also great to work with people that are so passionate about what they do. Journalism is a tough business, but it’s encouraging to see a staff that is always looking for new ways to improve their work and serve their readers better.

And though I have had a wonderful 11 months with this staff, it is time for me to leave. In August I will begin a photography internship at The Arizona Republic, and then I graduate in May 2013. I will always be thankful to Arizona Highways for such a fantastic experience, and I hope to be back here one day. I’ll at least be dropping by for some lunchtime conversations in the fall.

Yesterday, the staff got together to discuss the editorial calendar for 2013… yep, we’re already thinking about what we’re going to cover starting in January. This meeting was a chance for the team to talk about the stories and the photography. Needless to say, we accomplished a lot, while having plenty of laugh-out-loud fun (I blame the Butterfingers and Diet Cokes).

Check out some photos from the meeting… and stay tuned for January 2013 — it’s going to be a fabulous year for Arizona Highways.

The entire Arizona Highways team (well, minus Kathy Ritchie who was manning the iPhone cam, Randy Summerlin and Diana Benzel-Rice) discussing stories for 2013.

Check Out the Arizona Highways Crew Working on the August Issue… 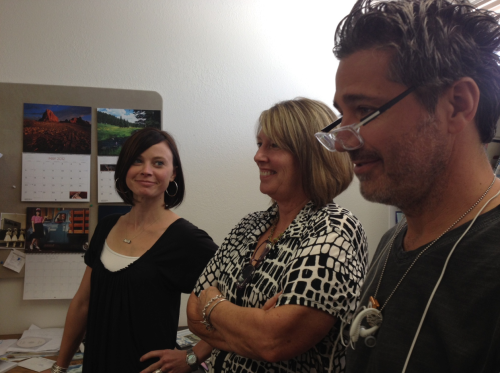 We just wrapped up the July issue of Arizona Highways and we’re already hard at work on our August issue.

Yes, we’re in the thick of things, but we thought it would be fun to share a day in our life. Yesterday, the gang crammed into Art Director Keith Whitney’s office to take a look at a layout he’s been working on for the last few days. Everything we do at Arizona Highways is a collaborative effort… and that’s a very good thing, because each month we create a top notch product.

As for how we work together, well, let’s just say comedy writer Robert Orben was absolutely right: “If you can laugh together, you can work together.”

January is Right Around the Corner… Check Out Our Cover!