Category Archives: In the Area 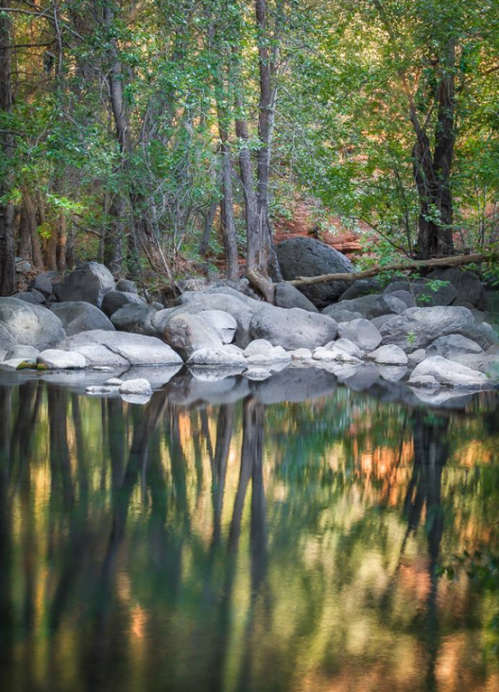 The number of acres burned in the Coconino National Forest has more than doubled from last year, according to Don Muise, the forest aviation and fire staff officer for the forest. Between January 1 and April 30 of last year, there were 16 fires, all human-caused. So far in 2014, 23 fires have occurred, and all but one were human caused. Muise spoke to us about what fire restrictions are in place to protect the national forest and why more fires are occurring this year.

What current restrictions are in effect?
We’re in what we call Stage 1 restrictions, and what that entails is fire, campfire, charcoal or coal-stove use is restricted except in a valid recreation site. The other thing that is prohibited is smoking, except within a closed vehicle, building or developed recreation site.

How are restrictions decided?
We try not to impose bans on fires just haphazardly; we have indicators that we use to tell us when conditions are such that we should do that. The fire restrictions that we use in the forest are a staged restriction plan, starting from the Stage 1 restriction all the way to Stage 4, which is a full forest closure. That’s a very difficult situation, closing off 1.8 million acres to folks who want to recreate on the national forest.

Is it normal to have restrictions early in the season?
We’re a little earlier than normal; last year we didn’t impose Stage 1 restrictions until about May 17, but because of the lack of snowpack this year and the dry conditions, it really forced us to start using restrictions as a prevention tool to prevent further starts. What we were seeing was the fires that we were getting — most of them human-caused — were getting up and running on us and making it difficult. What we call the “resistance to control” was getting tougher and tougher.

What preventative measures can visitors take to protect the forest?
It’s too bad that a few folks will ruin it for the many, because we get tons of visitors up here, and part of their enhanced recreation experience is having a campfire, and I can understand that. What happens, though, is there are some people that don’t understand or don’t care and won’t thoroughly put out their fire. They’ll just drive away and let it burn, and then the wind comes up and blows it around or it gets out of the containment. Our big pitch to folks is, when you can have campfires, make sure they’re completely out and completely cool to the touch.

What other information should visitors be aware of?
There are a lot of things that can and will start fires in the forest, including generators, chain saws, and motorcycles and ATVs without proper spark arrestors on their mufflers. So just be very aware that if they want the forest there to enjoy, then they’ve got to help us prevent the starts that could happen from any of those things.

Filed under Eco Issues, In the Area, Mother Nature

If you’re planning on attending this weekend’s annual Yarnell Daze celebration — appropriately called Don’t Take Yarnell for Granite — keep in mind that State Route 89 in Yarnell (mileposts 276-278) will be reduced to one lane on Saturday, May 10, from 10 a.m. to 11 a.m. Traffic will be guided through town by a pilot car, so expect some delays.

This year’s Yarnell Daze is especially significant after last year’s devastating Yarnell Hill Fire. “The town remembers the 19 men who lost their lives and hopes to honor them by celebrating the thousands of volunteers who have worked so hard to help rebuild our tiny community,” says Jerry Florman, this year’s Yarnell Daze chairman. “The event has taken on a life of its own. There have been so many people calling who want to be a part of it. There is a tremendous amount of energy coming into our lovely mountaintop town. … It’s just awesome.”

Visitors to this year’s fest can expect plenty of fun-filled events, including a parade, car show, beer garden, food, live music, lots of vendors, an antique marketplace and, of course, tons of stuff for the kids — think ice-cream-eating contest.

Filed under In the Area, News

A red chair from Cape Cod that has become an Internet celebrity is coming to Prescott this weekend to help celebrate the city’s sesquicentennial.

The Prescott Pines Inn, which you may remember from our October 2013 issue, will be hosting “Red” this weekend, starting Friday, April 18. The B&B’s owner, Dawn Delaney, will be photographing Red all over Prescott, including at Courthouse Plaza, the Palace saloon, Watson Lake and other picturesque locations. And on Monday, April 21, the public can visit Red at Prescott Pines and view a slideshow that documents the chair’s travels.

What’s the big deal about a red chair? The inn explains:

It all started in the winter of 2012 with a single photographic image. Innkeeper Beth Colt of the Woods Hole Inn on Cape Cod posted a picture on Facebook of her simple red chair perched on the ice behind her house, and then watched her page light up with “likes.” The picture was shared on the Facebook page of Julie Ann Cromer, a photographer from Santa Barbara, CA, who was inspired by the image to visit Beth’s inn and took an amazing second photo of the chair on a local beach. This inspired Colt to share the chair with other innkeepers beyond the Cape Cod area, expanding “Red’s” journey through New England in late summer and fall. This lucky chair has been staying at the best inns and B&B’s throughout the country, and has its own website and blog. …

As Red has traveled it has taken on a personality of its own and been photographed at each stop in iconic places throughout that inn’s region.  Due to the overwhelming response to this humble red chair, Colt decided to send the Red Chair coast to coast via a network of B&Bs to be delivered in the Spring of 2014 to the California-based photographer who inspired all this with her photo.

To keep tabs on the chair’s cross-country journey, visit its website. And for more information on its appearance at Prescott Pines Inn this weekend, visit the inn’s website.

Filed under In the Area, News, Things to Do

Rejoice, Phoenix-area hikers: The Echo Canyon Trailhead, and the Summit Trail up Camelback Mountain, will reopen at sunrise Wednesday, January 15.

The trailhead closed in the summer of 2013 for a massive renovation project. The City of Phoenix expanded the trailhead parking area, and it now features 135 parking spaces — nearly double the original 68 — along with flush toilets, a chilled drinking fountain, a shade ramada, bike racks and a roundabout to improve traffic flow.

Crews also rerouted the first quarter-mile of the trail, and the new Summit Trail is about an eighth of a mile longer as a result. The total distance to the summit is about 1.3 miles, but hikers are warned that with a 1,200-foot elevation gain, this trail is one of the Valley’s most strenuous. Fit hikers should allot 45 minutes to reach the summit and another 45 minutes to descend.

Another important note: For the first six months after reopening (through July 15), the Summit Trail will be “hikers only” — in other words, no dogs allowed. Dogs are still allowed on the Cholla Trail, the other major trail at Camelback.

The trailhead will be open from sunrise to sunset. Even with the added parking spaces, it’s sure to be packed once it reopens, so get there early or be patient while waiting for a place to park.

For more information on the improvements to the trailhead, including a map of the rerouted trail, click here.

Filed under Hiking, In the Area, News 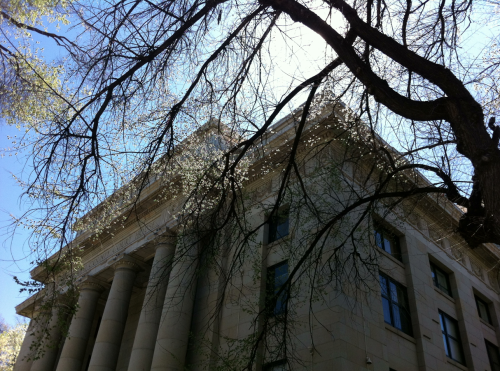 With the Doce Fire, near Prescott, still at zero percent containment, many of our readers may be wondering how Prescott itself is being affected. David Maurer, the CEO of the Prescott Chamber of Commerce, says the town isn’t feeling any major effects from the fire, which is about 8 miles northwest of historic Courthouse Square in downtown Prescott. “It’s basically just another business day,” Maurer says, adding that the prevailing winds are blowing the fire’s smoke away from the town.

The area threatened by the fire is relatively remote, Maurer says. There have been about 460 evacuations so far, but as of midday Wednesday, no structures have burned.

Maurer says all of Prescott is still “open for business” and that upcoming events will go on as scheduled. That includes this weekend’s Bluegrass Festival, on Saturday and Sunday.

Filed under Eco Issues, In the Area

Some exciting news from our friends at the Grand Canyon (and another reason to hit the trail this summer!):

On Saturday, May 18, more than 500 people gathered to celebrate the trailhead renovation of one of Grand Canyon National Park’s oldest and most-visited trails. The dedication ceremony, celebrated jointly by Grand Canyon National Park and the Grand Canyon Association, was opened with a traditional welcome by tribal representative Diana Sue Uqualla from the Havasupai Tribe.  Superintendent Dave Uberuaga spoke of the significance of the renovations to the historic trail, which included a new seating area and plaza, new restrooms to replace portable toilets, paved parking, new stone masonry walls, accessible walkways, and a new identity sign. 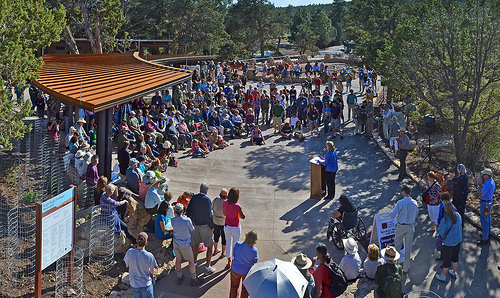 The project was overseen by Grand Canyon National Park Project Manager Vicky Stinson, with construction completed by Merrill, Inc., out of Cheyenne, Wyoming. Chevo Studios and Rock & Co., both from Denver, built the stone masonry walls, the seating areas and the new identity sign.

The project was funded jointly by park entrance fees and private funds raised through the park’s official fundraising partner, the Grand Canyon Association.

Major donors to the project were recognized at the event, including:

Bill Sweeney, a major donor to the Bright Angel trailhead renovation, announced a matching gift of $15,000 to support the renovation of the historic Kolb Studio, which is on the South Rim. The match was made in two hours, and the Sweeneys raised their matching gift to $25,000, which was matched by the end of the weekend.

“We appreciate the funding that was made available through generous donors that made the completion of the Bright Angel Trailhead Rehabilitation Project possible. We also greatly appreciate the donations made in support of the renovation of the historic Kolb Studio,” said Uberuaga. “Because of their generosity, we have been able to bring the area around the Bright Angel Trailhead up to modern standards, and we will be able to make great improvements to Kolb Studio, a facility visited by thousands of park visitors each year.”

Filed under Eco Issues, Hiking, In the Area