Q&A: How the Town of Duncan Saved the Greenlee Mural 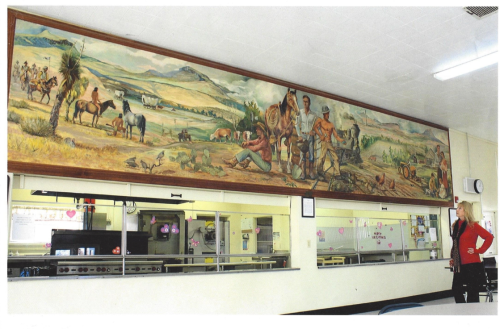 “Every child that ever went to that school saw it every day. We had to do something to save it.” —Doug Barlow

Duncan, Arizona, in Greenlee County, is about as close-knit as a small community can get. It has a population of maybe 800 people, mostly from large, extended families who originally migrated there in the late 1800s and early 1900s. What makes Duncan especially unique is that its history is captured in a mural that hangs in the cafeteria of the town’s tiny high school. Greenlee, by Hal Empie, is the largest mural in the Southwest. It was painted in 1953, and it recounts the history of the Greenlee County, from the Coronado conquistadors to the 1950s and everything in between.

Time took its toll on the mural. Doug Barlow and Ann Empie, the artist’s daughter, decided to do something about it, so they embarked on a fundraising campaign along with the Duncan Pride Society. To date, they have raised more than $26,000.

Below, Barlow talks to us about the artist, the mural and why the community decided to save this piece of Duncan history:

How did the school acquire the painting?
Hal Empie came here as a young man; he was the local druggist. He was born and raised in the Safford area, which is about 40 miles away. He became an artist. He had fiddled with it all his life, and he got serious about it and wanted to do a mural. The high school had just built a new gymnasium in the late 1940s, and he wanted to do it on the wall of the gym, and they were kind of hesitant. He said, “I promise you I won’t ruin the wall; I will do it on a canvas and I’ll hang it.” The school finally commissioned him to paint the mural, and he was paid $600. The mural measure 5 feet by 27 feet. It was hung when I was in kindergarten. The cafeteria is probably the worst place in the world to have this hung, but there was nowhere else in town with a wall big enough to put it on. And the school would never give it up. Every child that ever went to school there saw it every day. We had to do something to save it.

What inspired you to be a part of this project?
The Empie Gallery is run by his daughter, Ann Empie, in Tubac. She’s a good friend of mine, and I went down to visit her one day. We were talking about Duncan and something came up about the mural, and I mentioned, “Shouldn’t we do something about that mural?” and she said, “I’m glad you brought that up.” So we sat there that day and planned what we needed to do. I was born and raised here. I’m not an art critic or an art expert. I always loved that painting, and every time I look at it, I see something different that I’ve never seen before. It’s amazing. It’s a piece of Duncan history. I would hate to see it get so far lost that we couldn’t restore it.

You had a fundraising goal of $20,000, and you reached $26,000. How did you manage that?
The Empie Gallery donated a beautiful print of one of his paintings, and we raffled it off. For every $25 you gave, you received a ticket for the raffle. And if you donated $250 or more, then you would have your name put on a plaque that would be hung next to the restored painting. We raised $10,000 on that. This was a community project. We got a huge amount from the alumni and a lot of donations. We got a grant from the Freeport-McMoRan Copper and Gold Foundation for $14,000. It all added up.

When is the restoration expected to begin?
We’re going to start taking the painting down on May 27. Charlie Burton is the one who will restore it. She said the restoration would probably take about five weeks. And there will be drying time after that. Then we will re-hang it. During the process, we will have a scheduled time for people to call ahead a make a reservation to see the painting during its restoration. And we have a fantastic bed and breakfast called the Simpson Hotel for people to come stay the night.

What do you think is the importance in saving this work of art and works of art in general?
Art is just something that stays with you, especially if you knew the person and what it took for him to finish the piece. It took a year for him to finish the painting. I think Hal Empie is one of the greatest artists I ever saw, partly because I grew up around him and knew him personally.

What was Hal Empie like?
When we were little kids, we lived on a little farm across the river about a mile from town. When my brother and I were young, if we got the farm work done, then we might be able to go catch the matinee in the theater. But it cost a dime to get in, and we weren’t given any money. We would walk below the bridge and pick up soda-pop bottles, and hopefully we could get seven of them. We could get 3 cents apiece for the bottles, and with 20 cents we could both get in the theater. We always got there early, so we would go to Hal Empie’s drugstore, which was right next to theater, to look at the magazine rack, and there was always 10 or 15 little kids sitting there reading the comic books. Of course, none of us could afford to buy one. As I got older, it dawned on me how Empie never once came to us and told us we couldn’t read those books. Even though he couldn’t sell them — they weren’t new, ya know, with 50 little kids going through them. But he never said a word. That was Hal Empie in a nutshell. We all grew up loving Hal Empie. At that time we didn’t know he was an artist. We just knew he drew pictures. In the second grade, we went on a field trip to Hal Empie’s drugstore. There was 45 of us, and he drew a caricature of each one of us that we could keep. Do you think any of us got home with our picture? Imagine what they would be worth today.

5 responses to “Q&A: How the Town of Duncan Saved the Greenlee Mural”