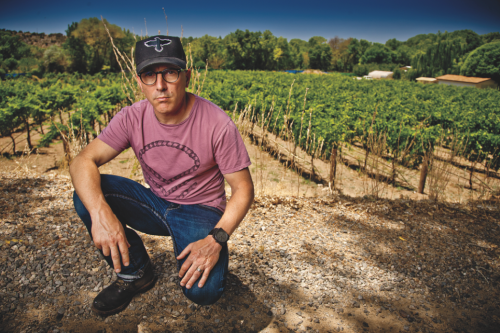 In case you missed yesterday’s Tuesday Trivia (BTW, congrats Sharon Schnitzius Scholl), we asked which rocker-turned-winemaker is spotlighted in our October issue? Well, a lot of you knew the answer to that question: Maynard James Keenan. But for those of you who did not know, or for those of you who are just massively huge fans of that dude from TOOL, we thought we’d share the article about the rock star who is Quietly Making Noise in the Verde Valley.

PS, Don’t forget to participate in our next Tuesday Trivia… Simply “Like” us on Facebook and you can play to win! 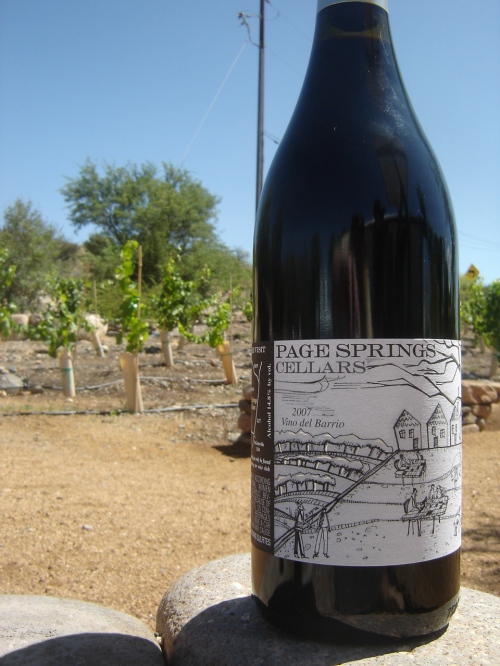 Found this article on Bloomberg about Arizona’s wine country… Yes, in case you’ve not heard the news, Arizona has wine country. Sure, we’re no Napa, but we’ve got some good stuff — award-winning stuff — growing in the Grand Canyon State…

(FYI, be sure to check out our October issue featuring one of Arizona’s many pioneering winemakers).

So tell us, what do you think of Arizona’s wine country?

I learned two things by staying in my room at The Hermosa Inn to avoid the 107 degrees Fahrenheit temperature outside in Scottsdale, Arizona. First, daytime TV is much worse than I imagined. Second, a bottle of Arizona wine will help you get through it till dinner.

Of course, it is surprising that Arizona makes wine at all, given the withering heat and arid conditions. In fact, the state has 45 federally bonded and licensed wineries, many with fine western names like Tombstone, Bitter Creek and Broken Glass.

While Spanish missionaries made wine here in the 18th century, modern viticulture with European vinifera grapes like chardonnay, cabernet sauvignon and grenache only started in 1973 in Sonoita.

Today there’s even an Arizona Vines & Wines quarterly magazine, whose current edition concentrates on Arizona women involved in the industry, including Deb Wahl of Oak Creek Vineyards & Winery, which produces 1,500 cases a year of zinfandel, syrah, merlot and chardonnay. Wahl says she moved to Sedona after 9/11, looking for “somewhere quieter, somewhere safe to raise my son.”

There are three wine trails to tour, Verde Valley northeast of Phoenix, Sonoita south of Tucson, and Wilcox southeast of Tucson. They are all in high desert, at elevations between 3,800 and 6,000 feet — similar to those of Mendoza, Chile — where temperatures are 20 to 30 degrees lower than in Phoenix and Scottsdale. Even so, the few bottles sent out of state, sold via the Internet, can only be shipped in cooler months.

The wine I drank in my room was a Page Springs Cellars Vino del Barrio 2009 ($15). This family-owned winery is just 15 minutes south of Sedona, with a tasting room and weekly tours. Labeled simply “Arizona Red Wine,” it is a reserve blend of the winery’s best barrels and varietals.

At a friendly 13.6 percent alcohol, it has a grapey flavor and an undercurrent of sweetness that would be very good at an Arizona pork barbecue or with soy sauce-based dishes. A wine like this loves salt and sweetness.

One night, when the temperature dropped to the chilly 90s, I went to FnB, one of Scottsdale’s most popular new restaurants, where Chef-owner Charleen Badman and partner-sommelier Pavle Milic are committed to introducing guests to the breadth of Arizona wines.

The ebullient Milic, who kept calling me “My dear sir,” arrayed flights of Arizona bottlings that were all clean and well made, the reds tending to be dense and very full-bodied.

“In a blind tasting of red wines from Arizona, California and Europe, this wine won out over a Chateau Lynch-Bages, my dear sir,” he said as he poured a Keeling-Schaefer Three Sisters Syrah 2008 (about $18).

I asked who did the tasting, and he said chefs and wine experts. I wasn’t entirely surprised. Big, dense reds tend to dominate more refined Bordeaux in tastings.

Still, the Keeling-Schafer, made “on the western slope of the Chiricahua Mountains,” was very good — rich but not cloying — and went well with smoky items on FnB’s menu like lamb tenderloin with summer tabouli, mint and pomegranate.

I also enjoyed a 2008 Dos Cabezas Toscano Red Blend ($24) from Cochise County, a mix of sangiovese, cabernet sauvignon and cabernet franc, which was nice and loose and pretty velvety on the palate, with a strong finish.

Owned by Todd and Kelly Bostock since 1995, the winery moved to Sonoita in 2003 and now makes 3,000 cases of wines a year. At an alcohol level above 15 percent, however, more than one glass of the Dos Cabezas might require a designated driver for the night.

As the scent of a mesquite grill floated in the air of the restaurant, I tried a Callaghan “Back Lot” Red Blend 2008 ($25) from Cochise County, an unusual combination of mourvedre and zinfandel that had the flavors of deep cherry and a hint of chocolate.

My favorite of the whites, “Ann’s Blend” ($22) from the same winery, was an outstanding accomplishment made with 45 percent grenache blanc, 35 percent verdelho and 20 percent symphony (a hybrid of muscat and grenache blanc created at the University of California Davis).

Kent Callaghan’s winery started in 1990, the year Phoenix’s Shy Harbor Airport was shut down by a 120-degree heat wave. Even at 4,800 feet in Callaghan’s vineyards up in Elgin the temperature rose to 105, killing thousands of his vines. He replanted with hearty varietals that could take the high temperature during the day and the cool desert nights.

Next time I’m in Arizona, I hope it will be in winter. I’ll light a fire, watch the steaks grilling, pop the cork on an Arizona wine and wait for the moon to rise over Cochise County.

(John Mariani writes on wine for Muse, the arts and leisure section of Bloomberg News. The opinions expressed are his own.)