A very important message from our friends at the Grand Canyon:

Grand Canyon, Ariz. – Due to increased fire danger throughout Grand Canyon National Park, park officials will be implementing fire restrictions for all areas within the park except the Colorado River corridor.

Beginning at 8 a.m. on Friday, June 13, all wood-burning and charcoal fires, including campfires, warming fires and charcoal barbecues, will be prohibited throughout the park, including all campgrounds and residential areas. Pressurized liquid or gas stoves, lanterns and heaters possessing shut-off devices are allowed.

The restrictions are being implemented in response to current and predicted weather and fuel conditions, as well as corresponding fire danger rating levels.  The South Rim of Grand Canyon National Park is at extreme fire danger and the North Rim is at very high fire danger. These conditions are expected to remain at until monsoonal moisture occurs.  The restrictions will remain in place until significant precipitation falls and fire danger levels subside.  “We always hope visitors will consider taking some additional voluntary precautions to help prevent wildfires.” says Chief of Fire and Aviation Jay Lusher.

One Less Spark, One Less Wildfire.  Please do your part. Don’t let a wildfire start.

For the latest fire information in Grand Canyon National Park, please visit our website at http://www.nps.gov/grca/parkmgmt/fire_info.htm.  To learn more about fire restrictions on other public lands in Arizona and New Mexico, please call the Southwest Area Fire Restriction Information Line at 877-864-6985 or visit http://wildlandfire.az.gov.

The Slide Fire near Sedona continues to grow, consuming 10,609 acres of forest with containment at only 5 percent. Unfortunately, there isn’t much good news today. We’re hearing reports that this fire could double in size before firefighters are able to get it under control.

Below is the midday incident report from the Incident Information System:

Flagstaff, Ariz. – The Slide Fire is located in Oak Creek Canyon just north of Slide Rock State Park and burning northward, predominantly on the west side of the canyon.

The weather conditions in the area of the Slide Fire remained fairly stagnant this morning. The failure of the air inversion to lift has grounded observation aircraft and prohibited the use of helicopters for aerial ignition. Line crews will continue to burnout by hand the area between the West Fork of Oak Creek Canyon and Forest Road 535. Mop up is continuing around structures in Oak Creek Canyon.

Because of fire conditions Coconino County has instituted a ban on open burning on County public lands and private lands in the unincorporated areas of the County. The ban went into effect at 10:30 a.m. Friday May 23 and will remain in effect until fire danger conditions subside. Further information on this ban may be found at http://www.coconino.az.gov.

The Incident Management Team expresses their sincere thanks for donations which were received in support of our firefighters. However they request that future donations be made to charities like United Way, the American Red Cross, Coconino and Yavapai Search and Rescue, or other local charitable organizations. Firefighters working the Slide Fire are well supplied and need no further clothing and food items. Individuals wanting to donate their time should contact the Northern Airzona United Way at (928) 773-9813 or nazunitedway.org.

Coconino County is reminding people to register their cellphone number with the County’sCodeRED emergency notification system at www.coconino.az.gov/emergency. Only those residents whose numbers are registered will receive a direct phone call about any type of pre- or mandatory evacuation order.

For information on air quality, please visit the Arizona Department of Environmental Quality website at http://wildlandfire.az.gov

As wildfires continue to rage across Arizona, several state agencies are implementing fire restrictions, effective today, in an attempt to prevent more fires breaking out.

Currently, the Tonto, Prescott and Apache-Sitgreaves national forests are under Stage II fire restrictions. That means the following activities are prohibited in those forests:

In addition, the Bureau of Land Management announced Stage I fire restrictions for specific lands administered by the BLM:

In addition to the Stage II and elevated fire restrictions [listed above], the discharge of air rifles, exploding targets or gas guns except during a lawful hunt will be also be prohibited on lands managed by the BLM Lower Sonoran and Hassayampa field offices, BLM land in the counties of Maricopa, Pima, Pinal and Yavapai, the Sonoran Desert National Monument and the Agua Fria National Monument. Exceptions and exclusions to fire restrictions in these BLM-administered areas will permit certain limited activities, including:

The Gila River Fire Department has issued Open Burning Permit Restrictions and Moratorium, which is a community no-burn notice that prohibits outdoor fires typically used to dispose of refuse.

Finally, Grand Canyon National Park said in a news release that while no fire restrictions are yet in effect at the park, caution is still required:

Visitors are reminded of the following year-round fire regulations.

Please keep these restrictions in mind as you embark on weekend trips. We’ll continue to update you with any new restrictions as we hear about them.

The Slide Fire continues to grow but, according to reports, is 5 percent contained. So far, there have been no reports of injuries or structures lost. There are some 900 firefighters and personnel working hard to contain the fire, so let’s keep them in our thoughts as they continue to fight this awful fire. Right now, it looks like increased moisture and the possibility of rain tomorrow may help give firefighters an edge; unfortunately, lightning strikes could cause other fires or pose a danger to crews.

Smoke snakes through Oak Creek Canyon as it approaches the town of Sedona. The San Francisco Peaks are in the background. | Courtesy of Ted Grussing

Sedona residents awoke this morning to their first taste of the Slide Fire smoke that has been inundating Flagstaff since the fire broke out at 4 p.m. Tuesday. The cloud blanketed the town — a good sign, actually, indicative of a more favorable direction of reduced winds that aided the stalwart crews fighting a fire that’s now grown to almost 5,000 acres.

This is the good news. And there’s more. It’s as hopeful as can be, given the circumstances.

Today signals the beginning of a significant shift in the weather. Gone are the strongest advisory-level winds of early this week that fueled the fire’s rapid northward march, threatening the southern Flagstaff communities of Forest Highlands, Kachina Village and Mountainaire. Because winds will be breezy again this afternoon, these communities remain in the pre-evacuation state of readiness they’ve been in for almost 24 hours.

On Friday, a “seasonably strong low moving through Arizona” will mean reduced winds and an even more favorable change in direction, and by afternoon, there’s a 40 percent chance of rain showers that could be a boon to firefighting efforts.

More good news: The fire has now been officially designated a Type 1 incident (top priority), meaning fire personnel available anywhere in the country can be brought in.

After an early morning flyover of the burned area in pilot extraordinaire, aerial photographer and frequent Arizona Highways contributor Ted Grussing’s Lambada motor glider, we spent an hour or so talking to the helicopter base commander and a number of the pilots about the water and fire-retardant drops that are making the first real progress in containment. There were personnel from Tucson, California, Montana, Idaho and Wyoming. Many have come directly from the devastating fires in San Diego.

A close-up of West Fork and the fire’s origin point (left). | Courtesy of Ted Grussing

Ground crews are also hard at work on the northern perimeter along Forest Road 535, backfiring to create firebreaks and contain the fire’s northward spread.

Yavapai and Coconino counties’ search-and-rescue teams, including quite a few volunteer members from Sedona, have been scouring the backcountry over the last two days for stray hikers and campers, ensuring their safe evacuation, as well as manning the many trailhead, forest-road and highway closure points.

All these guys are incredibly hardworking and motivated. Their reputations as heroes are richly deserved.

A firefighting crew prepares to take off. | Courtesy of Ted Grussing

But there’s also some very bad news, likely the worst we could have expected.

Take a look at the Coconino National Forest map of the fire from yesterday, and you’ll see that the entire 3.5-mile length of the West Fork Trail was overrun by the fire as it moved northward. The first reports of the fire burning in the watershed home of our most popular and beautiful trail came yesterday afternoon (as did the first confirming incident-report maps). Ted’s amazing aerial photos from this morning show the deep chasm that is the West Fork watershed still choked with smoke. 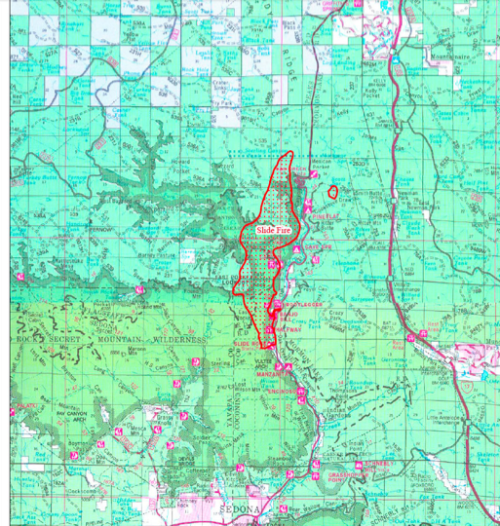 Given the number of tinder-dry, bark-beetle-infested ponderosa pines in West Fork, it would be a miracle if parts of the trail weren’t severely burned. It’s hard to tell from the maps, but it looks like maybe the first few crossings may have survived intact. But there’s no real way to know until there are actual boots on the ground.

And it could be weeks, months or even years before those boots are public. Obviously this is only informed supposition on my part, but given that certain badly burned trails from the 2006 Brins Fire in Sedona stayed closed for more than three years, this fire of equal magnitude could bring similar closures.

What’s worse, a trail of such enchanting beauty could be horrifically marred for years to come. As many have pointed out, fires are natural, restorative and necessary. It will grow back, likely healthier, years from now. That’s for certain.

Losing this world-famous trail will have a real impact on Sedona’s business community. That’s for certain, too.

And perhaps a generation of visitors, Arizonans and Sedonans will miss its tranquil beauty, its magnificent canyon walls, the fall color change, the quiet of a freshly fallen snow in winter along its peaceful banks.

I’m deeply saddened to think I’m unlikely to ever see it again as beautiful as I’ve been privileged to photograph it for the last decade.

Paul Simon’s words ring truer than ever today: “Long ago, it must be, I have a photograph / Preserve your memories; they’re all that’s left you.” 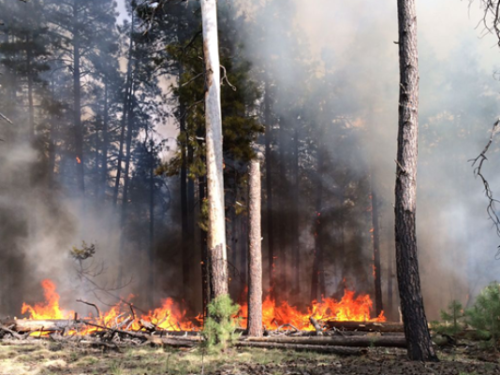 The Secret Fire burns near Flagstaff on Saturday. | Courtesy of U.S. Forest Service

The U.S. Forest Service is fighting two forest fires that broke out over the weekend in the Coconino National Forest near Flagstaff.

The 6-acre Secret Fire, in the Red Rock-Secret Mountain Wilderness, was 70 percent contained as of this morning, according to the Arizona Emergency Information Network. The 1.5-acre Boulder Fire, on Mount Elden, remains zero percent contained, the network said.

While we don’t know what caused either fire, it’s a fact that improperly extinguished campfires have led to many devastating wildfires in Arizona — including the Wallow Fire, which burned more than 530,000 acres in the Apache-Sitgreaves National Forests in 2011. With that in mind, let’s revisit the Forest Service’s guidelines for putting a campfire “dead out”:

Recent drought has left most of Arizona a tinderbox and more prone to wildfires than usual. As we get more information on these or other wildfires, we’ll pass it along.