The fifth-annual Grand Canyon Celebration of Art is just about wrapped up, but there’s still time to participate. The event, which has been going on since September, raises money for the Grand Canyon Association, Grand Canyon National Park’s official nonprofit partner. Through Monday, January 20, participating artists’ works are on display at the Canyon’s Kolb Studio, where you can view and purchase pieces.

Admission to the gallery is free with park admission. And on Monday, the last day of the exhibit, that’s free as well!

To see what’s available for sale and find out how to purchase a piece, click here. 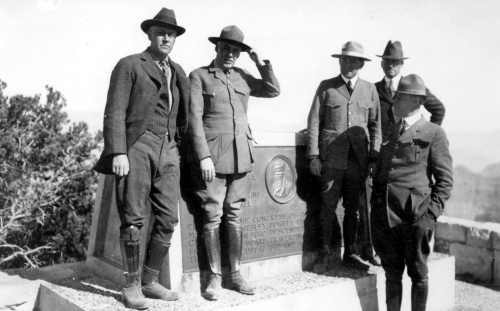 If you’re in love with the Grand Canyon like we are here at Arizona Highways, then we hope you’ll take a moment to thank the advocates who worked to protect this natural wonder. Today, the park is celebrating the anniversary of its designation as a national park.

You can read more below:

“Protection of this spectacular landscape actually started long before Grand Canyon became a national park,” said Grand Canyon Superintendent Dave Uberuaga. “People started trying to protect the canyon as early as the 1880s; and its first official protection and recognition came in the 1890s when it was set aside as a national forest reserve by President Benjamin Harrison.”

Harrison wasn’t the only President to take an interest in the canyon’s protection. In the early 1900s, after saying of the canyon, “Leave it as it is. You cannot improve on it. The ages have been at work on it and man can only mar it….”, President Theodore Roosevelt proclaimed Grand Canyon a national game preserve. Two years later, after passage of the Antiquities Act, he established it as Grand Canyon National Monument. Arizona achieved statehood four years later in 1912, just five years before Grand Canyon was designated a national park in 1919.

“On February 26, the National Park Service will host the park’s 94th birthday with cake and a small ceremony at the Grand Canyon Visitor Center…,” continued Uberuaga, “…but it might surprise people to know that for years, the U.S. Forest Service hosted Grand Canyon’s birthday celebrations. The Forest Service administered Grand Canyon from the time it became a forest reserve until it became a national park. This place really does have a fascinating and sometimes complicated history.”

Everyone is invited to join in the park’s birthday celebration. A small ceremony will be held at the Grand Canyon Visitor Center on the South Rim of the canyon at 11 a.m. on Tuesday, February 26. Birthday cake will be served immediately afterward. (Cake will also be served at the Verkamp’s Visitor Center in Grand Canyon Village.) Those who plan to attend might want to brush up on their Grand Canyon history, though.

“We’ll have a contest of sorts to test people’s knowledge of the Grand Canyon and its history,” explained Uberuaga. “I wouldn’t be surprised if it got pretty competitive.”

The Grand Canyon is 277 river miles long, averages 10 miles across, and its walls rise almost a mile above the Colorado River. Designated a national park on February 26, 1919, Grand Canyon National Park is now a World Heritage Site, as well. Visitation to the park in 1919 was just under 38,000 and in 2012 was almost 4.5 million. Grand Canyon National Park is one of 22 national park units in the state of Arizona which collectively contribute over $700 million in economic benefits to the state.

Grand Canyon Gets A Grant

Last month, the Grand Canyon Association, was awarded a grant from the Nina Mason Pulliam Charitable Trust for $104,500 to support a two-year pilot project aimed at restoring natural and cultural resources at Granite Camp and Monument Creek in Grand Canyon National Park.

Granite Camp and Monument Creek, near River Mile 93.5, are very popular areas for both backpackers and river users, but like many sites within the Colorado River corridor, they have been adversely impacted by the operation of Glen Canyon Dam, high recreational use, and the introduction of non-native species. In particular, tamarisk, a non-native plant also known as salt cedar, dominates the plant community in the river corridor within the park, as it does riparian areas throughout much of the southwest. Due to its impacts on water resources, native plant diversity, wildlife habitat and recreation, considerable effort has been focused on its eradication within side canyons in the park since 2000. However, to date, tamarisk has not been removed along the mainstream Colorado River within the park due to the sheer magnitude of the issue and associated costs and logistical constraints.

In 2001, tamarisk leaf beetles were introduced into the Upper Colorado River Basin to help control tamarisk. Until recently, researchers thought the beetle would restrict its range to above the 38th parallel, which is near the upper end of Lake Powell north of Grand Canyon. However, in 2009, beetles were first detected in Grand Canyon National Park, and ongoing monitoring indicates they have spread along much of the Colorado River within the park. The beetle is actively defoliating tamarisk trees. After repeated seasons of infestation, the trees may ultimately die, which will have dramatic impacts on the canyon’s complex riparian ecosystems. While the demise of this non-native invader is welcome, it may pose new threats including the possibility of other non-native plants becoming established in its place. Additional management challenges will include determining how to manage extensive stands of dead tamarisk and the most effective methods to restore native riparian plant communities in a highly altered river environment.

The grant provided by the Pulliam Trust will allow GCA to support the National Park Service’s restoration efforts with volunteers and logistical support. This funding will help restore native riparian communities, mitigate user impacts, recover data from and stabilize a threatened archeological site, and enrich the visitor experience through place-based educational programs and materials at two sites as a pilot project.

Grand Canyon National Park Watershed Stewardship Program Manager Todd Chaudhry said, “Due to the ongoing expansion of the tamarisk beetle, it is likely that many sites along the mainstream river will lose the habitat and shade provided by non-native tamarisk that native wildlife and recreationists have come to rely on. This grant will provide the volunteers and support to proactively restore native riparian habitat to a site that is currently dominated by tamarisk, test different restoration methods, and assess the feasibility of restoring similar sites within the river corridor.”

According to Susan Schroeder, GCA’s CEO, “This project highlights many of the challenges in preserving the plethora of natural and cultural resources within the Colorado River corridor. We believe that the key to successfully meeting these challenges is taking an interdisciplinary approach and developing strong partnerships, such as this one with the Nina Mason Pulliam Charitable Trust and Grand Canyon National Park.”

An interdisciplinary team of natural and cultural resource specialists from the National Park Service will assess the restoration sites this September. There are no planned closures at Granite Camp or Monument Creek due to restoration activities.