See Amazing Lego Creations This Summer at the Heard Museum

Courtesy of the Heard Museum

Legos have been a popular children’s toy for generations, but in recent years, they’ve also become an art form. The Heard Museum in Phoenix is celebrating that transformation with Build!, an interactive exhibit that’s on display at the Heard through September 28.

We asked Caesar Chaves, the Heard’s creative director, a few questions about the project.

Q: What is Lego brick art, and how did the project come to be?
A: Our director, James Pepper Henry, took the helm at the Heard about a year ago and suggested we do an exhibit using Lego bricks. Lego bricks are so versatile and accessible. Some people have created amazing artwork. We wanted to bring that art form to the public’s attention, and we wanted to include works by American Indian artists, some of whom were creating Lego-brick art for the first time. And, of course, the Lego-brick activity areas make the exhibit even more fun.

Q: How did you find Native American Lego-brick artists, and what did they contribute to the exhibit?
A: Our exhibit designer, Yuki Corello, recommended building a Lego-brick mosaic based on Marlowe Katoney’s Angry Birds textile. She also suggested Autumn Dawn Gomez, who makes these fabulous crowns out of hama beads. Jaclyn Roessel, our director of education, suggested we work with Lalo Cota for the mural. Our curator, Diana Pardue, suggested commissioning a coyote-themed painting by Steven Yazzie and asking him to make a Lego-brick coyote to go with the painting. 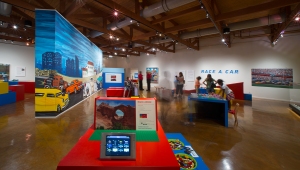 Courtesy of the Heard Museum

Q: Talk to me about how these pieces were commissioned — for example, Action Comics No. 1 or Bicycle Triumphs Traffic?
A: Action Comics No. 1 was borrowed from a Colorado father-daughter team, and Bicycle Triumphs Traffic was borrowed from nationally known Lego-brick artist Sean Kenney. We also borrowed a Lego-brick motorcycle, Captain America, by another nationally known Lego-brick artist, Nathan Sawaya, from Mesa Arts Center.

Q: Some of these exhibits are huge. How long did it take to piece together these mosaics?
A: Angry Birds took a lot of prep. The design and mapping led to the brick order that was placed with the Lego factory overseas. Then sorting was performed by staff, with coordination by Arizona Lego builder Dave Shaddix. However, it took only three hours, with more than 60 staff and volunteers, to put the actual mosaic together.

Q: Tell me more about Cota’s contribution.
A: Lalo Cota is a well-known mural painter. Since transportation was one of the exhibit themes and we had planned a wonderful Lego-brick car activity for the gallery, we wanted to connect thematically to Central Avenue’s past history of Saturday-night car cruising. So we asked Lalo to paint a mural that included a car, and we also asked him to plan a design in Lego bricks that would fill the side of a car. He did an incredible job.

Q: This exhibit is very kid-friendly. What can families expect?
A: There are some really fun activities for kids and the whole family. One of the most popular activities is the racetrack. Kids can make their own Lego-brick cars and race those made by friends or parents. They can also have their picture taken in the full-scale Lego-brick car. Another activity that draws a lot of people is the stop-motion video. You can make a Lego-brick person, animal, fantasy figure, whatever is appealing, and move them to make a short video.

Also, the Heard’s Courtyard Café has developed a menu for kids to accompany the exhibit. Families can come, spend time in the exhibit, take a lunch break and then go back to the exhibit for more fun. If you become a member of the museum, you can keep coming back all summer. It’s a nice, entertaining break from the heat and fun for the entire family.

For information on Build! and other upcoming events at the Heard Museum, visit www.heard.org.

Filed under Et Cetera, News, Things to Do