Take a Hike … but Use Common Sense 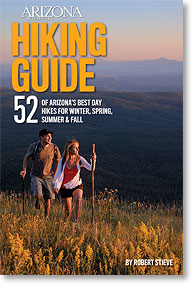 It’s warming up out there, and that means hikers and mountain bikers need to take extra precautions before hitting the trail. Unfortunately, according to a story that ran on AZcentral.com, there’s been an uptick of mountain rescues in the Valley compared to last year at this time. Translation: People are not playing it safe out there.

“Common sense is the most important thing to take on the trail,” says Robert Stieve, editor of Arizona Highways. “And water is just as important. A gallon a day is the general rule; however, if you’re hiking the desert in the summer, which is strongly discouraged, you’ll need at least double that amount.”

Stieve also advises that you adhere to 10 basic rules — commandments, really — which he spells out in much more detail in his book, Arizona Highways Hiking Guide: 52 of Arizona’s Best Day Hikes for Winter, Spring, Summer & Fall:

Spread the word and please share these life-saving tips with out-of-town visitors. 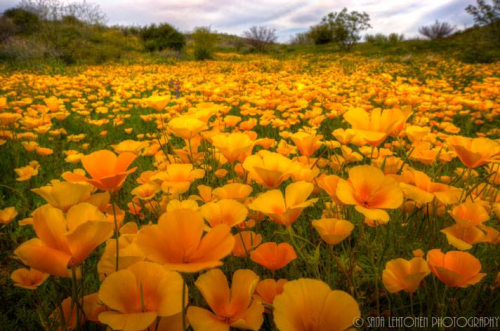 Although you’ve likely seen wildflowers popping up in front yards and on roadsides in parts of the state, this Saturday, March 1, is the unofficial start of wildflower season in Arizona. On that date, Phoenix’s Desert Botanical Garden will activate its Wildflower Info Site, giving wildflower seekers up-to-date reports on desert wildflower blooms in Central and Southern Arizona.

The site may be even more valuable than usual this year. Due to a relative lack of rainfall, this season’s wildflowers are expected to be somewhat sparser than normal. The DBG’s site can help take the guesswork out of your wildflower search.

Also debuting March 1: the DBG’s Spring Butterfly Exhibit, which features hundreds of fluttering butterflies at the garden’s Marshall Butterfly Pavilion. The exhibit runs through May 11.

It’s Snowing in the Desert!

Mother Nature put on quite a show last Wednesday… turns out, we actually made news! Well, in honor of her amazing handiwork, our theme this week was desert snow. A huge thanks to everyone who shared their stunning images on our Facebook page. Be sure to share this week’s gallery with your friends, especially those who’ve never seen a saguaro covered in the white stuff.