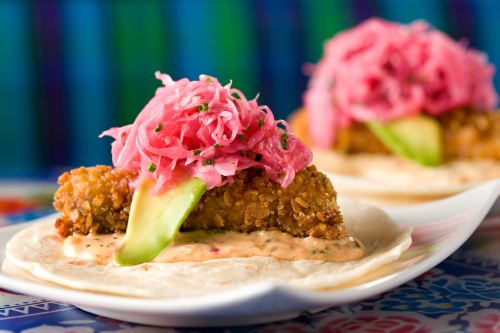 Arizona is definitely a foodie’s paradise… despite what some of the critics might say, we serve up some tasty food (a road trip crisscrossing the state will certainly prove me right), and we have a knack for taking a really good invention — like the taco — and making it WAY better.

So it’s not surprising that cities across our state play host to various culinary events, which focus on the art of food… however, when I heard about this particular event, I was intrigued.

The Second Annual Taco Festival, held on October 15, brought out pros and amateurs alike to battle it out for a $7,500 prize… and, of course, bragging rights. Scoff if you will, but this event not only brought out around 10,000 people, but it was a serious competition for some folks… and for the Grand Champion, the event was a sort of coming out party.

Chef Dave Conn — the Chef de Cuisine for three dining destinations by Chef Jose Garces, including Distrito at The Saguaro in Downtown Scottsdale — and his team took down the competition and set the stage for things to come at Distrito… like really good food.

Below, Conn talks about his big win and why the taco has been elevated to an art form.

What team were you on? How many people were on your team?
I competed in the Arizona Taco Festival with my colleagues from Distrito at The Saguaro. Distrito is a modern Mexican restaurant owned by Chef Jose Garces, who also created our menu (including the tacos), and The Saguaro is a new boutique hotel opening this November in Scottsdale. Distrito will be open in mid-December. In all, 8 people joined our team for the Taco Festival.

You’re a well-known chef… Why decide to compete in a taco making competition?
Well, actually I work with Chef Garces, who is well-known across the county for his amazing restaurants and as one of seven Iron Chef’s on the Food Network. As a team, we participated because it seemed like a great way to introduce ourselves to our new neighbors here in Scottsdale. Not to mention that it was a lot of fun!

What do you say to people, cynics, who are like, ‘it’s just a taco?‘
Two words: try one.

What sets your taco apart from the masses?
Our tacos are made from top quality ingredients and prepared relatively simply; the slow-roasted ropa vieja chicken and fresh toppings really shine that way.

So, what does this win mean to you, your career?
I am looking at this win as a warm welcome from our new home and an invitation to settle right into the Scottsdale food scene. We’re thrilled to be here.

What did you win?
The overall prize for Grand Champion; we also took the second place in the chicken and beef categories. And of course, we’re thrilled to have the signature ‘really gaudy trophy,’ as well.

Why is the taco being elevated to an art form?
All food is art, if it’s done right. Tacos are just finally getting their day in the sun.

Why is street food becoming so popular? What’s this shift all about?
Street food is authentic, flavorful, easy to eat and affordable – what’s not to like about that?

Filed under Loco for Local, Q&A, Things to Do, Wining & Dining