We Think Too Often of Fire 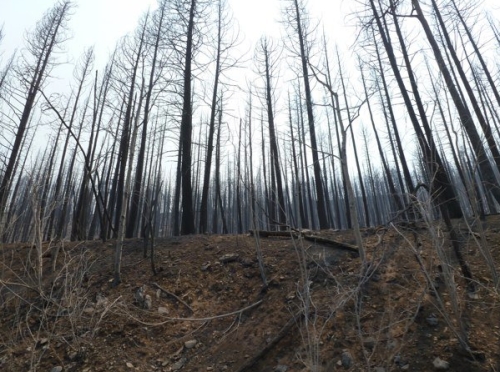 Wildfires leave scars that last for decades, which is why preventing them is so important. | Kelly Kramer

We are forced too often to think about fire.

Hundreds of photos of Oak Creek Canyon have appeared in Arizona Highways. It’s a favorite destination for our contributors, who capture the way the water spills and pools in the creek. The way the light echoes across red walls of the canyon, then filters through its trees. Its birds and deer and all of the pretty things that tend to go where water is.

In the coming weeks and months, those photos will become outdated, wrong, thanks to the Slide Fire. The pretty things likely will return when the flames have gone, but the trees will have a century’s worth of growing to do. And, months from now, in an image review, we’ll see photos of the canyon. Rather than plucking our favorite for a portfolio, we’ll remind each other that the landscape is different, darker now, just as it is in Bear Wallow. In Carr and Cave Creek canyons. In Yarnell.

Fire, in some cases, is more animal than element. It jumps and claws and changes direction. For fire, roads mean merely a suggestion to stop. With the Slide Fire, as with the 475 other human-caused fires this year — and as with Wallow three years ago — the animal never should have been let loose.

We preach Leave No Trace ethics in the pages of our magazine because we live them. We know that we, as hikers and campers and cyclists and climbers, are stewards of the land. Our June issue addresses Leave No Trace as it relates to Fossil Creek, a once-pristine wilderness area that’s being decimated by recreationists who can’t seem to clean up their garbage. There, the U.S. Forest Service has outlawed campfires because too many people were leaving them unattended. Because too few people paid attention to Leave No Trace. Or never learned the ethics. Or didn’t care.

Here’s why you should: Two years ago, we published a story about what the Wallow Fire did to the Apache-Sitgreaves National Forests. It wasn’t pretty. The story came out around the 10th anniversary of Rodeo-Chediski, which, before Wallow, was the state’s largest fire. That story, at its root, was about the Leave No Trace ethics, too, as the men responsible walked away from their campfire.

This image shows the aftermath of the devastating Wallow Fire, another human-caused blaze. | Kelly Kramer

That campfire ultimately burned 535,000 acres. Only time will tell how big the Slide Fire will be and just how many acres of forest it will destroy, but we pray that we never see a fire of Wallow’s scale again. Almost as much as we pray for rain.

This week, we used orange Post-It notes on a map to mark fire-damaged areas of the state. And we got a little choked up, both for the memories we have of the fire-cut forests and for the theft — there are places in Arizona that we’d have liked our children and grandchildren to have experienced the way we have, to have caught the whisper of wilderness in pristine places.

Those Post-It notes looked absurd against the soft palette of the map, but when you visualize the impact of fire that way, you realize that humans are destroying the things that they love most — open space, breathable air, a sense of freedom. And that, too, is absurd.

Yes, there’s a restorative power to fire. It can cleanse a landscape, make way for new growth, prevent future fires. But as our editor said this week, “let Mother Nature take care of herself.” And leave your campfires “dead out.”  Because we’re really tired of thinking about fire.

12 responses to “We Think Too Often of Fire”