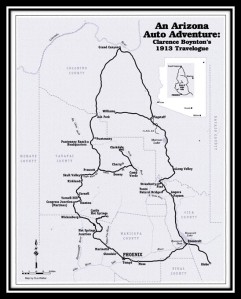 The route taken by Clarence Boynton on his 1913 trip around Arizona. | Courtesy of Nancy Burgess

Nancy Burgess is an Arizona historian, photographer and writer.  She has worked in historic preservation for 25 years and has authored five books about Arizona history, including her most recent work, An Arizona Auto Adventure: Clarence Boynton’s 1913 Travelogue. It recounts a man’s 36-day automobile journey around Northern Arizona in 1913, a time when automobile travel was rare and precarious.

A century later, Burgess’ book presents Boynton’s complete travelogue, along with Burgess’ own experiences on the same route. It features 200 images and a foreword by Boynton’s grandson, Rush. We asked her a few questions about her book and her work as an Arizona-based historian.

Q: What is the background of An Arizona Auto Adventure?
A: It includes a travel journal, the entire travel journal, written in 1913 by a man named Clarence Boynton. He wrote about his 1,000-mile, 36-day camping trip in Arizona in 1913. And that journal was sent to me via email by a good friend of mine who went to high school with Boynton’s grandson. He finally got around to reading his parents’ travel journal and knew that my friend Julie loves Arizona history, so he sent it to her and she sent it to me. And after I had read it three or four times — it was 28 pages, single-spaced, typed — I felt that it really needed to be a story that was out there in the public for people who love Arizona history.

Q: What did it take to research and write a story like this?

A: First, I had to figure out how to present the journal. Twenty-eight pages obviously isn’t enough for a book. I decided the best way to present it was in chronological order, starting out with a chapter introducing the concept of road travel in an automobile in Arizona 18 months after statehood, when there was no state highway department. I started with that. Then I wrote a chapter about Boynton and his wife. He came to Arizona as a tuberculosis patient to St. Luke’s Home, and Dr. Williams Lawrence Watkins was the medical director at St. Luke’s at the time.  Watkins loved auto travel; he was what’s called an “autoist.”  So he, his wife, their 9-month-old baby, Boynton and Boynton’s wife set out on this 36-day driving trip in the fall of 1913. It didn’t come with any photographs. And I’m a photographer and photo collector.  I included 200 images, including maps from the 1913 Arizona Good Roads Association map book.  Those maps have all kinds of interesting little details.  One road was named “Bad Road.”

Q: In 1913, was it an ambitious idea to travel by automobile?
A: Not many of the roads were completely constructed for an automobile, which Boynton calls “the machine” throughout his journals.  It was a 1913 Studebaker touring car, and it belonged to Dr. Watkins. They had taken a short trip up the Apache Trail in the spring of 1913, but this was the big trip. Boynton had a master’s degree in chemistry from Yale. He was a very intelligent man and writer. And he had a great sense of humor, which he definitely needed on this trip. He was also a good mechanic, and so was Dr. Watkins. If you owned a car in 1913, you almost had to be a good mechanic or you didn’t leave town. They encountered all kinds of mechanical problems, many of them caused by the water crossings and the terrain.

Q: No AAA back then?
A: No AAA. No gas stations to speak of. They had to carry their own gas. They had to carry extra tubes, extra tires, extra axles and tools. They were pretty creative mechanics, because they had to fix things with whatever they had on hand, including Dr. Watkins’ medical kit. One of the main purposes of this trip was that Dr. Watkins wanted to show that this man who had come to Arizona a year earlier as a tuberculosis patient was not only well enough to take this trip, but also well enough to do the physical work that was necessary. They were building up the roads and hauling logs out of the way.  It was a lot of physical work. There were areas where the car had to be pulled by horses because they couldn’t get it up the hill or they couldn’t get it out of where it was stuck.  On their trip from Mormon Lake to Strawberry, there was no road on the map, so, as he put it, “we determined to map it ourselves.”

Q: As you were preparing this story, what was it that really inspired you to get this story out?
A: Well, mainly, it’s such a great story about a certain place in time in Arizona, written by someone who wrote a great travel journal. It starts in Phoenix, and it includes most of the northern part of the state. They went out Grand Avenue, which was brand new and probably one of the best roads they drove on. So what I did was, I personally drove the route. I had a map created of the old route, not today’s route.  There are lots of similarities, and you could drive this route today in a couple of days. So, on my travel, I was able to write about all these little communities along the route and all the places they went through. Some of them no longer exist, but most of them do. I think it’s really interesting to compare the way we travel today with the way they traveled a hundred years ago. My goal was to have the book out a hundred years after they did the trip, and it came out in September, which was the hundredth anniversary of the trip.

Q: Where can people buy your book?
A: It’s available in all the bookstores in Prescott.  Right now it’s on my website, which is www.diggingarizonahistory.com.

Q: This is your fifth book.  What other books have you written?
A: They are all on my website. My first book is called Ranch Dog, a tribute to the working dog in the American West, written in 1990. I was actually the photographer and the editor for that. Then, in 2005, I wrote A Photographic Tour of 1916 Prescott, Arizona. Then I did an Arcadia book entitled Around Yavapai County: Celebrating Arizona’s Centennial. In 2012, I published An Illustrated History of Mayer, Arizona.

Q: Do you have any words of wisdom for anyone who is an aspiring writer or historian?
A: Just sit down and write; don’t worry about whether it’s perfect or not. There are so many stories out there that are so interesting about history, whether it’s family history, a neighborhood or how you grew up. People from different walks of life grew up in different ways. I met a guy in a bookstore a few months ago down in the Valley. He was from South Phoenix, and he felt like South Phoenix had kind of been ignored. I asked if he was familiar with Arcadia books. He was not, so I showed him some that were on the shelves there. He told me he had access to a lot of photos because his family had been there for four or five generations. I encouraged him to just do the book. He said he had never done a lot of writing. I said it doesn’t matter. Just do it. Well, he’s now doing an Arcadia book about South Phoenix. Those are the kinds of stories that need to be told. I took a 28-page story and turned it into a book. But it is a lot of research. Anyplace you go, any archive, any collection, they’ll always help get you started. Sometimes you have to do a lot of looking, but sometimes you will come across something purely by accident, which happens to me often.