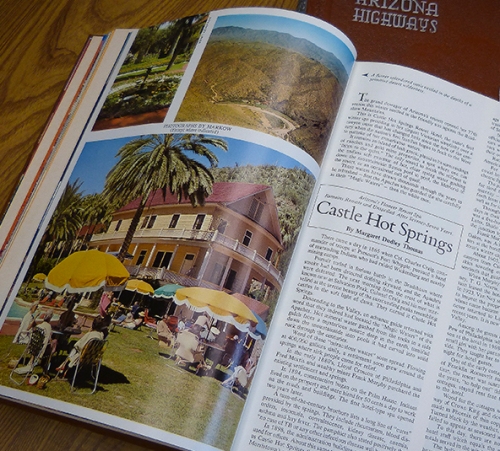 Castle Hot Springs Resort, as seen in the March 1974 issue of Arizona Highways

It remains an island of lush green, placid in its surroundings of ranches and gold mine properties, a spot where one can “listen to the quiet.” The only sound to break the stillness is the endless soft murmur of hot, clear spring water gushing down the mountainside flumes pool to pool, the lifeblood of the resort, or an occasional call of quail.

These waters have drawn thousands through the years to be refreshed — first the Apaches who guarded the site carefully as their “Magic Waters” — then the white men. …

Those who follow the well-worn path uphill to the springs to indulge in relaxing massages or soak up the beneficial warmth of pools that range from 125 degrees to 105 degrees, walk in the same path used by the Apaches and early guests.

Just two years later, though, a fire destroyed the main building of the resort, which had been open since 1896. Shuttered since the fire, the property is now going up for auction, according to The Arizona Republic. While the main building is gone, the resort still features its swimming pool, tennis courts, administrative building and guest house — along with the springs, which still produce 180,000 gallons of hot water a day.

The property went on and off the real-estate market for several years; at one point, it was listed for $5.7 million. Bidding for the auction, though, starts at just $500,000, of which $50,000 is due as a deposit before the February 27 auction. So, if you happen to have that kind of money lying around, you could own a piece of Arizona history. For more information, contact CBRE Auction Services.