Some exciting news from our friends at the Grand Canyon (and another reason to hit the trail this summer!):

On Saturday, May 18, more than 500 people gathered to celebrate the trailhead renovation of one of Grand Canyon National Park’s oldest and most-visited trails. The dedication ceremony, celebrated jointly by Grand Canyon National Park and the Grand Canyon Association, was opened with a traditional welcome by tribal representative Diana Sue Uqualla from the Havasupai Tribe.  Superintendent Dave Uberuaga spoke of the significance of the renovations to the historic trail, which included a new seating area and plaza, new restrooms to replace portable toilets, paved parking, new stone masonry walls, accessible walkways, and a new identity sign.

The project was overseen by Grand Canyon National Park Project Manager Vicky Stinson, with construction completed by Merrill, Inc., out of Cheyenne, Wyoming. Chevo Studios and Rock & Co., both from Denver, built the stone masonry walls, the seating areas and the new identity sign.

The project was funded jointly by park entrance fees and private funds raised through the park’s official fundraising partner, the Grand Canyon Association. 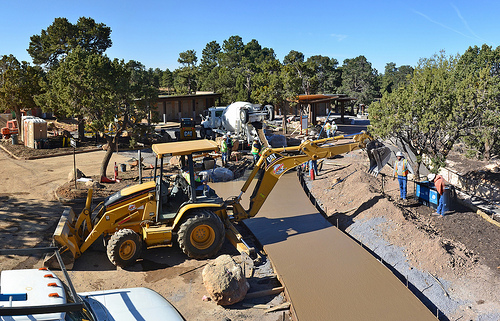 Major donors to the project were recognized at the event, including:

Bill Sweeney, a major donor to the Bright Angel trailhead renovation, announced a matching gift of $15,000 to support the renovation of the historic Kolb Studio, which is on the South Rim. The match was made in two hours, and the Sweeneys raised their matching gift to $25,000, which was matched by the end of the weekend.

“We appreciate the funding that was made available through generous donors that made the completion of the Bright Angel Trailhead Rehabilitation Project possible. We also greatly appreciate the donations made in support of the renovation of the historic Kolb Studio,” said Uberuaga. “Because of their generosity, we have been able to bring the area around the Bright Angel Trailhead up to modern standards, and we will be able to make great improvements to Kolb Studio, a facility visited by thousands of park visitors each year.”

Filed under Eco Issues, Hiking, In the Area