Paul Markow Talks Shop and Even Learns a Thing or Two… 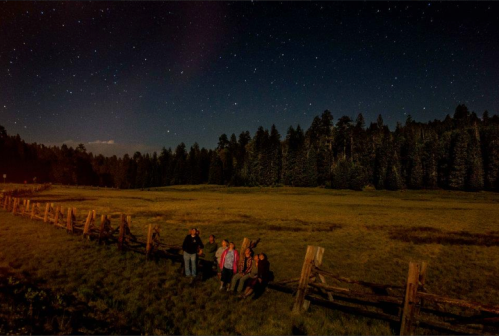 If you follow Facebook, then you know that the Arizona Highways crew recently spent some time in the White Mountains for a staff retreat and several photo shoots. Contributing photographer Paul Markow was also along for the ride and, on his down-time, he snapped this amazing photograph of the team.

Below, Paul talks about how he scored this magical shot:

The best lesson from this shot is to always have your camera nearby. You never know when a opportunity will present itself. This impromptu photo-shoot happened around 11p.m. at Hannagan Meadow Lodge. We had a sliver of a moon starting to set and a couple of exterior lights 100 yards away coming from the lodge. I believe Arizona Highways Photo Editor Jeff Kida said something like, ‘What a beautiful shot this would make.’ As a fellow shooter, I immediately knew he was talking about a long exposure to bring out the detail the naked eye could never see. I ran to the car and grabbed a tripod — necessary for a 20 second-plus exposure — and my Canon Mark 4, which has better low light sensitivity than my more expensive Canon Mark 3 1ds.

I had never shot this type of image before, so I was excited to see what would happen. I picked out a composition — not that easy in almost total darkness — set my ISO (chip sensitivity) at 5000 and opened up too my widest f/stop — f/4.0 on my 24 to 105mm lens — and set the shutter to manual with a 25 second exposure.

Since I could not see to focus, I set the focus on manual and racked out to infinity. This part was a mistake since infinity on some cameras is actually past sharpness on focus. Who would have guessed? Anyway, this made my shot less then tack sharp, so like a typical photographer, I am calling these images impressionistic shots of stars to infinity… or something like that.

The impression is truly wondrous and the lesson here is that your camera has the ability to see light where you thought none existed. So, don’t be afraid to step outside of your comfort zone and make a beautiful image that might have been hiding in the dark.