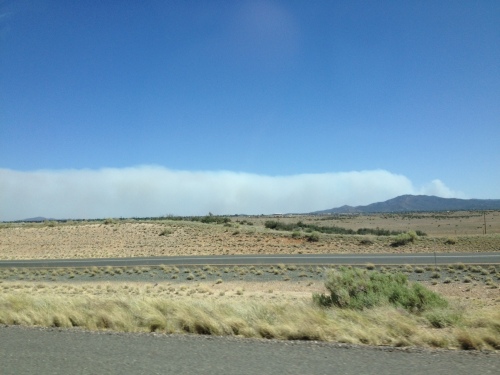 Gladiator Fire as seen from the 89A

It’s been over a week since the Gladiator fire started, and things are still looking grim…

The fire has already consumed 15,000 acres of land near the Crown King area, with containment at 20 percent. Compounding matters, winds are expected to kick up again, temperatures are high and humidity is low… Translation: wind-blown embers could ignite a new fire. Still, firefighters are working furiously to get ahead of the fire.

While fires are to be expected, especially during the dry, summer months, their impact on both the environment and the people who live in the affected areas is long-lasting.

As Arizona Highways Editor Robert Stieve wrote in his May Editor’s Letter,”Fire is devastating.” And in areas like the White Mountains, it can “take hundreds of years for some places to recover… if they recover at all.”

Once the Gladiator fire is put out, the area surrounding Crown King will recover, but it’ll take time… In the short term, the people living and working there will need our help…

The most active wildfire burning in Arizona, the Gladiator Fire north of Crown King, has charred more than 13,000 acres since breaking out last Sunday.  More than 1,100 fire personnel are battling the fire, which is 15 percent contained.  And, even though the blaze has been mainly burning away from Crown King, bed and breakfast owner Taryn Denyce says a return to the evacuated town appears to be a way off because of the lack of electricity caused by burned power poles.

“There’s been at least 19 poles burned — APS poles — but they were finally given access to go in starting today, so it could be another seven days before we have power back up there. So we still don’t know when we can go home.”

And, Denyce says she just hopes people will still visit the town this summer.

“We’re taking a huge hit, a huge loss. This is normally our peak busy season. We’re usually full to capacity, and I’m not even getting phone calls for future reservations.”

For more information about the fire, visit www.inciweb.org or www.wildlandfire.az.gov.