Celebrating Our Centennial: How Arizona Got Its Name 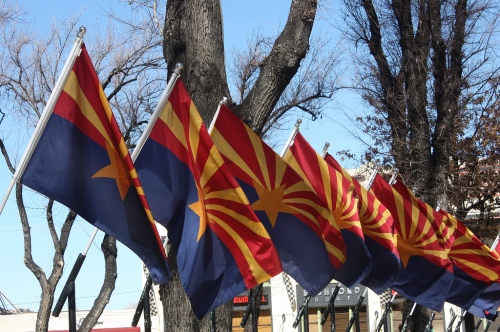 Several weeks ago, we received an interesting e-mail from our our friends at Tumácacori National Historical Park. In it, they talked about the meaning of the name Arizona……. According to the e-mail, Don Garate, former Chief of Interpretation at Tumacácori, as well as “the world’s authority on Juan Bautista de Anza and phenomenal historian,” wrote several articles detailing the origin of the name Arizona. Garate was of Basque descent and spoke the language…. Unfortunately he passed away in 2010, leaving Tumacacori to share the story.

We’ve decided to share the story below…. It’s an interesting slice of Arizona history and if you want to  learn more, be sure to visit Tumácacori National Historical Park’s website. You can also e-mail questions to the Acting Chief of Interpretation at Anita_Badertscher@nps.gov.

Basque is a unique language, unlike any other known to linguists. The word “Arizona” breaks down into components that require four words in English:

Ariz: oak tree
on: good
a: the

To make it plural, you would add a “c,” making it “Arizonac.”

In October 1736, Yaqui Indian prospector Antonio Siraumea stumbled upon large pieces of silver in the hills forty miles southwest of the Tumacácori Mission. News of the discovery spread quickly. Prospectors rushed to the canyon from all over Sonora to dig for the “balls and plates” of almost pure silver. One prospector, José Fermín de Almazán, found a single slab that weighed over one hundred arrobas, roughly 1 ¼ tons.

By mid-November, Juan Bautista de Anza (senior), Captain of the Fronteras Presidio and Chief Justice of Sonora, learned of the discovery. He travelled to the site to halt the illegal, unregistered collecting, and to determine whether the find was a buried treasure, a clandestine smelting operation, or a natural vein. If the silver was a natural deposit, the prospectors would owe Spain’s King Philip one-fifth of their find. If it was a treasure, ALL of the silver would belong to the King.

By the time Anza arrived, there were 400 people digging for the precious metal. Anza stationed soldiers on-site to prevent further mining. He set up his headquarters twelve miles away, at the home of Deputy Justice Bernardo de Urrea. Urrea’s ranch was called “Arizona,” meaning “the good oak tree” in Basque, his native language.

From Arizona, Captain Anza impounded silver, recorded statements, and conducted the investigation. Discussion then moved to Mexico City. Finally, in August, Anza and five of Sonora’s leading miners returned to examine the canyon. The “experts” unanimously agreed that the silver was from natural veins. The silver — minus the King’s fifth — was returned to the miners.

Controversy over the decision raged for more than a decade. The name “Arizona,” the site from which so many documents had been issued, became synonymous with the amazing silver discovery.

One hundred twenty years later, the story of the “silver of Arizona” was well known to promoters of a new U.S. Territory proposed to be split off from the New Mexico Territory. The promoters needed a name that embodied the idea of great mineral wealth. It was the memory of “the silver of Arizona” that led them to choose a Basque name meaning “the good oak tree.”

Congress established the Arizona Territory in December 1858. On February 14, 1912, Arizona became the 48th state in the United States of America.

Some background on “Arizona” as a Basque word:

• Juan Bautista de Anza (senior), of the famous planchas de plata, was first generation Basque, having come over from the “old world” to New Spain at age 19. Bernardo de Urrea, owner of the Arizona ranch, along with a majority of the first explorers, settlers and miners in the area of Sonora known at that time as Arizona, was Basque.

• Oak trees grow everywhere at the ranch and throughout the entire area between present-day Nogales, Arizona and Saric, Sonora.

• “The good oak tree” is spelled “aritzona” in modern Basque. As with English, spelling has become standardized since the 1700s. At the time, Arizona might also have been spelled arisona or arissona, as Anza was also spelled Ansa and Anssa by various members of the family. No one gave spelling tests in the 1700s!

• The meaning of Arizona taught in our fourth grade classes is based on a series of fallacies. Because Basque was not a written language at the time, and the Basque country was part of Spain, the importance of the Basque presence in New Spain is not commonly understood. Because few people speak the language, over time the original meaning was lost.

In modern times, people struggled to figure out what the “original” name might have been. Clearly, it is not Spanish — while it is tempting to turn it into “arid zone,” of course it would then be “zona arida,” not “arida zona!” So, they thought, it must have been an Indian name, an O’odham word.

Based on old maps that label the area of Urrea’s Arizona ranch incorrectly as “Arizonac,” modern people — thinking that this must have been the original form of the name — worked backward to guess what the Pima (the Spanish name for the O’odham) name might originally have been. However, while arizonac is a perfectly good word in Basque — it is the plural of arizona, the good oaks — it was never actually the name by which the site was known. All efforts to translate “arizonac” as the place name originate from a notation written in the margin of a single, much copied, map, probably dating to the 1730s, when the plural form of arizona was well known. Although the site is correctly labeled on the map itself, subsequent copies often took their spelling from the margin notation. Based on this incorrect name, modern people sought an O’odham meaning for Arizonac, settling on “ali shonak, place of little springs.”

•Don Garate, the historian who brought the true story to light, grew up speaking Basque with his grandmother and has many cousins still in the “old country.” He was also fluent in Spanish, and conducted his research from the original, handwritten Spanish documents.

12 responses to “Celebrating Our Centennial: How Arizona Got Its Name”