Why We Should Care That Vets Day Parade Lacks $$$ 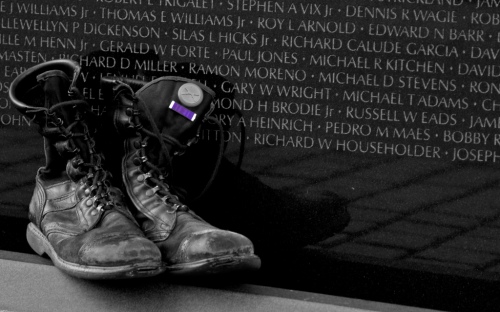 I really hadn’t given this year’s Veterans Day Parade much thought until I started writing our Things To Do page for November (yes, November)… I was Googling some information about the parade when I found an article that appeared on azcentral.com about the lack of parade funding available this year. Wanting to make sure the show would go on, I contacted the press person at the VA to inquire about the shortage in funds and how people could possibly help. She suggested I talk to Rick Romley. From 1989 to 2004, Romley served as the County Attorney for Maricopa County and in 2010, he was appointed Interim Maricopa County Attorney… These days, the decorated Vietnam Vet, who is now in private practice, is working very hard to help fund raise for this year’s parade. The goal is $60,000. Right now, volunteers, like Romley, have managed to raise around $32,000.

So why should you care about Veteran’s Day? Well, because, regardless of your politics — red, blue, donkey, elephant, left, right or somewhere in between — many Americans are leaving their families behind and putting their lives on the line every single day.

Check out our quick Q&A with Rick Romley who is working to raise funds:

What happened to the funding?

The Veterans Medical Leadership Council (VMLC) for years funded the parade for Phoenix and it has been very successful over the years. Last year, the VMLC decided to move away from the parade and put the money towards soldiers coming home Iraq and Afghanistan to help and support them. The VMLC only authorized $5,000 in funding for this year’s parade, making it necessary to raise money on our own.

Will the parade go on even if you don’t raise enough funds?

We’re going to put on a parade, but it may not be as large as years prior.These are difficult times for literally everyone. I do understand that, and to ask for donations at this time is asking quite a bit. But then, I’ve always believed that people come through during difficult times, and it’s during difficult times when we need to come together even more. This is one time when a few dollars can make a major difference — it can have some of the greatest good.

How do you respond to people who say, it’s just a parade?

It’s not just a parade. It’s not. For those individuals who have served, it’s a time when this nation takes pause and recognizes those individuals willing to give and serve this country, and we can’t do enough. I know we have a very busy schedules, but to take a few hours in our day to recognize and honor our vets is not too much to ask.

Why does this mean so much to you?

I was a squad leader in the Marine Corp Infantry in Vietnam and I saw a lot of sacrifices being made by people who won’t come back. My very best friend was killed in Vietnam. What this parade means to me is recognition — these people give more than should be asked of anyone, and yet they give willingly. You see it time and time again. It’s not too much to ask a nation to say thank you.

Final thoughts that you’d like to impart on our readers?

There are currently two wars in which people are losing mothers and fathers, sons and daughters, and we can’t forget that sacrifice. You may see the soldier on the plane, the young man in the wheelchair… sacrifices are going on every single day. We’ve got to continue to honor them.