Jon Waterman on the Colorado River.

Jon Waterman began his 1,450-mile journey like any other adventure he’s embarked on in the past 30 years, except this time he was not alone. The ashes of his mother sat in his kayak, awaiting their final resting place in the headwaters of the American Nile or, as most know it, the Colorado River. The loss of his mother was not the only new addition to his adventure in 2008. He also realized that the river was not reaching the sea and hadn’t been for over 10 years. This revelation sparked a 5-month journey that took Waterman into the depths of the natural resource that 30 million people and 3 million farm acres depend on as a main water source. In his book, Running Dry: A Journey From Source to Sea Down the Colorado River, published by National Geographic Books, Waterman interviews farmers, ranchers, boaters, vacationers, scientists and activists, giving them the opportunity to express their concern about the decreasing water levels of the Colorado.

Jodi Cisman: Why is it important that the Colorado River reach the sea?

Jon Waterman: The attitude in most of the riverbanks among engineers and water operators is that they are still getting water. They tend to forget that one of the reasons they’re still getting water is that there’s no longer a river in Mexico—they’ve run the river dry. Because of the changing climate, they are likely to lose even more of this river. In the past 10 years alone, we’ve been in a drought and the biggest reservoir on the river has been half full. We are potentially fighting a great crisis. It’s not only a loss of a wonderful natural resource, it’s a chain of supply and demand.

JC: What did you learn about yourself on your journey?

JW: I am no longer a young man. I’ve been taking these journeys for a long time and although that question used to have a lot of meaning for me, it didn’t have much meaning for me on this particular trip because I was there to investigate the river. I wasn’t there for myself. But I did miss my family very much. It was a rip-roaring adventure and it was fun and challenging and very difficult. I expected that there would be adversity along the way. Part of the allure is that when you conquer these kinds of challenges, you tend to build humility and it makes you more open to learning new things about the environment. When you get through it and know you’re going to survive, it leaves you more receptive to understanding the intricacies of nature. When you spend time out in the Grand Canyon or on the river, you begin to feel very small. That’s not a bad thing.

JC: How has researching the endangered natural resource changed your water use at home? 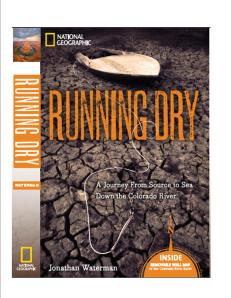 JW: In the end, if you can’t affect change after seeing these shortages in the river, then what good are we? I was always very cognizant of our water usage here at home where we live off a well that comes from the Colorado River. It would jeopardize not only my well but the water supply of nearly 30 million people. I came home from my journey thinking even more proactively about what I would do and how I could live my life as more of a conservationist. We began installing drip irrigation for our vegetable garden and plants around the house. We talked to our children about shortening the length of showers and thinking about our water use on a daily basis. We began questioning things that are fun — like pools and water parks – and asking whether we needed those kinds of extravagances in the arid desert.

JC: What about the rest of the world?

JW: I’m not only thinking about my use but water use throughout the nation. Is it smart to have green grass lawns in an area that gets 4 inches of rainfall a year? Seventy eight percent of the water along the river basin is used for farming. A tremendous amount is used for products, including beef, citrus, alfalfa and lettuce. If we can’t chose less consumptive water crops, we’re going to be forced to change our diets, like eating less meat or only eating lettuce in season. We’re a culture that’s come to expect to eat strawberries, even if we’re in a drought.

JW: This is a natural resource for us. It’s supposed to last forever. That’s one of the reasons I take such delight in nature because it has an eternal aspect to it. Having been unfortunate enough in dealing with my mother’s death, I was confronting our own mortality. The real train crash for me was the fact that this river, too, was dying. Anyone who doesn’t believe it can go down to the delta river and see that it no longer reaches the sea and that it hasn’t since 1998. The whole idea of how this beautiful and magnificent force of nature is stopped dead in its tracks was very upsetting to me, whether I was confronting the death of a loved one or not. It’s a true tragedy.

For more information about Waterman and his campaign to save the Colorado, visit www.jonathanwaterman.com.