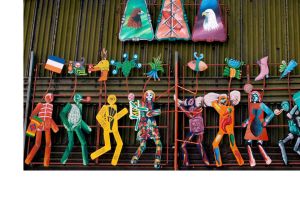 This fall, the K. Newby Gallery & Sculpture Garden in Tubac, Arizona will open the season with a public reception and opening of BEYOND BORDERS: Public Art for Private Spaces during Tubac: An Art Experience on Saturday, November 6th. Meet the artist Guadalupe Serrano from 1:00PM – 4:00PM. For the November 6th event, Paseo de Humanidad, a socially significant 13 piece assembly of painted metal figures which symbolize human migration will be moved from the Mexican side of the border to the gallery’s outdoor sculpture garden. The life- sized figures will be installed among a natural grove of mesquite so that it will appear as if they are walking along a trail in the Sonoran Desert.

The large, free standing metal sculptures, created by Guadalupe Serrano and his late partner Alberto Morackis, consists of symbolic human figures combined with Aztec and Mayan codices and contemporary border symbology. Paseo de Humanidad was so compelling that when it was first installed on the Mexican side of the border it became a shrine for families of migrants who came to place candles and small offerings at the base of the sculpture.

Kim Roseman, owner of the K Newby Gallery said, “We are excited to present this important example of ‘Border Art,’ especially at this time when border issues are at the center of the national stage. The exhibit is sure to generate lively discussions. After all, we are located only 16-miles from the international border.”

To heighten the border experience during the opening, a screening of 389 Miles: Living the Border, an award-winning documentary produced by Luis Carlos Romero Davis will be presented at 7:00pm at the Tubac Plaza Main Stage’s Cinema Under The Stars series. 389 Miles (which is the length of the Arizona/Mexico border) addresses the current immigration debate taking place. It presents the raw, daily life of human beings who come from different backgrounds and ideologies when it comes to immigration. Filmmaker Luis Carlos will host a Q&A immediately after the screening. Suggested donation for the screening is $10. Dress warm; hot drinks and refreshments will be served. In addition, Tubac Center of the Arts (TCA), Tubac’s regional non-profit arts organization, will be collaborating with El Centro des Artes, it’s sister community art organization in Nogales, Sonora to host a exhibition of Sonoran artists in the TCA front gallery. TCA is part of a binational arts connection of five arts programs jointly sponsored by the partner community foundations, Santa Cruz Community Foundation and FESAC, Sonora. A reception for Beyond Borders will be held at TCA on November 6, 4-6pm.