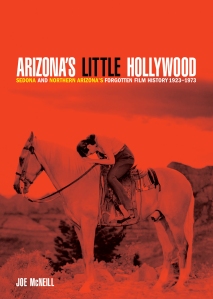 When tourists come to Arizona, hot spots at the top of their sight-seeing list undoubtedly include the Grand Canyon, Slide Rock or Monument Valley. But if they had visited these sites 60 years ago, they might have found themselves in the middle of movie sets, dodging hoardes of camera crews and famous actors and actresses.

Author Joe McNeill writes about Northern Arizona’s forgotten history and the 63 films that were produced there between1923 and 1973 in his book, Arizona’s Little Hollywood. “There was just too much material lost in time that had to be restored,” McNeill says about the project. He spent 7 years researching documented facts about the films and interviewing surviving directors and actors involved.

Sedona became such a busy Hollywood town that a hotel called the Sedona Lodge was built, equipped with editing rooms, make-up studios and bungalows for the cast and crew to stay at while on location. McNeill says since the lodge’s prime, parts of it were burned and torn down and the lobby was transported to the Arizona Snowbowl.

Although McNeill uncovered several interesting facts about the social and cultural aspects surrounding the 50-year period, he says an interview he found in a Flagstaff newspaper is by far the most fascinating.

“A film made in Sedona was literally one of Hitler’s favorite movies,” McNeill says. “He kept a copy of it in his collection.”

Der Kaiser von Kalifornien, which means The Emperor of California, is an anti-American Nazi propaganda film released in 1936. McNeill says it was shown to Germany’s children, invalids and elderly to inspire them to fight off the Russian advance toward Berlin. “This is a piece of information that is hard for people to accept but it is a part of Sedona’s history,” McNeill says.

And in about 5 years, Northern Arizona’s unknown film history will be on display when McNeill opens a museum in Sedona named after his book. After scouring eBay and private collections, McNeill and his partners have over 3,000 items to showcase, including prop guns, original scripts, trailers and pieces of Elvis Presley’s costume from Stay Away, Joe, which was filmed in 1968. “We hope it becomes the cultural centerpiece for Sedona,” McNeill says.

In his research, McNeill also learned a lot about the nature of film-making. “When you think of Hollywood, most people assume glamour and sophistication,” he says. “But the film crew on location in Northern Arizona really had to rough it.”

Actors, actresses and cameramen had to pitch tents when filming in the Grand Canyon and haul water to their sites. They spent weeks sleeping on solid ground and enjoyed little more than sponge baths. “There were documentations saying these actors looked haggard when they returned to California,” he laughs.

Although actors nowadays don’t have quite the same living conditions as they did in Sedona at the time of filming, McNeill says it gives the films an authenticity not seen today.

One response to “Big Pictures”